A jury has found 21-year-old James Alex Fields Jr guilty of first-degree murder for intentionally driving his car into a crowd of counter-protesters at a white nationalist rally in Charlottesville, Virginia, killing one woman and injuring dozens.

Fields was convicted in the August 2017 crash that killed 32-year-old Heather Heyer. Her death came after police forced a white nationalist rally to disband after participants clashed with counter-protesters.

The jury of seven women and five men began deliberating on Friday morning and took just over seven hours to reach the guilty verdict.

Prosecutors said Fields, who espoused white supremacist beliefs and took part in the “Unite the Right” rally in Charlottesville, had hate and violenceon his mind when he plowed his car into the crowd.

The Virginia jury rejected arguments from Fields’ lawyer that he acted in self defense. The defense claimed Fields was afraid he would be attacked after he saw large crowds closing in on two other cars.

Jurors also convicted Fields of eight other charges, including aggravated malicious wounding and hit and run.

Fields drove from his home in Maumee, Ohio to support the white nationalists, who were rallying to oppose the planned removal from a public park of a statue of Confederate general Robert E Lee.

As a large group of counter-protesters marched through Charlottesville singing and laughing, Fields stopped his car, backed up and then sped into the crowd, according to testimony from witnesses and video surveillance shown to jurors.

Heyer, a paralegal and civil rights activist, was killed. Nearly three dozen other people were injured.

Fields faces 20 years to life in prison. The jury is set to return on Monday to determine his sentence.

He has also been charged with federal hate crime counts, which could carry the death penalty.

The Charlottesville clashes stirred tensions across the country after Donald Trump said “both sides” were to blame and that there were “very fine people” among both the white supremacists and their opponents.

Hundreds of Ku Klux Klan members, neo-Nazis and other white nationalists, some dressed in battle gear, came to Charlottesville for one of the largest gatherings of white supremacists in a decade. 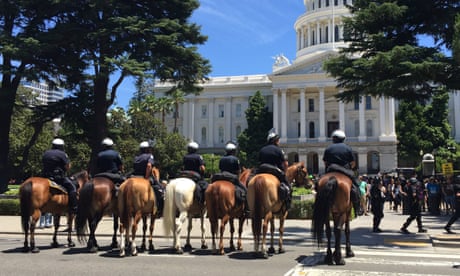 Anti-fascists were stabbed at a neo-Nazi rally. Then police tried to charge them

Prosecutors portrayed Fields as an angry white supremacist motivated by hate as he plowed into the crowd, showing a text message he sent containing an image of Adolf Hitler and a meme posted on Instagram showing bodies tossed into the air after a car plows into a crowd identified as “protesters”.

The defendant was known in high school for being fascinated with Nazism and Hitler, a former teacher said.

But Fields’ lawyer said he panicked and was “scared to death” after witnessing violent clashes earlier in the day. A video of Fields being interrogated after the crash showed him sobbing and hyperventilating after he was told a woman had died and others were seriously injured.

During one of two recorded phone calls Fields made to his mother from jail in the months after he was arrested, he told her he had been mobbed “by a violent group of terrorists” at the rally. In another, Fields referred to the mother of the woman who was killed as a “communist” and “one of those anti-white supremacists”.

… we have a small favour to ask. Three years ago we set out to make The Guardian sustainable by deepening our relationship with our readers. The same technologies that connected us with a global audience had also shifted advertising revenues away from news publishers. We decided to seek an approach that would allow us to keep our journalism open and accessible to everyone, regardless of where they live or what they can afford.

More than one million readers have now supported our independent, investigative journalism through contributions, membership or subscriptions, which has played such an important part in helping The Guardian overcome a perilous financial situation globally. We want to thank you for all of your support. But we have to maintain and build on that support for every year to come.

Sustained support from our readers enables us to continue pursuing difficult stories in challenging times of political upheaval, when factual reporting has never been more critical. The Guardian is editorially independent – our journalism is free from commercial bias and not influenced by billionaire owners, politicians or shareholders. No one edits our editor. No one steers our opinion. This is important because it enables us to give a voice to those less heard, challenge the powerful and hold them to account. Readers’ support means we can continue bringing The Guardian’s independent journalism to the world.

If everyone who reads our reporting, who likes it, helps to support it, our future would be much more secure. For as little as $1, you can support the Guardian – and it only takes a minute. Than